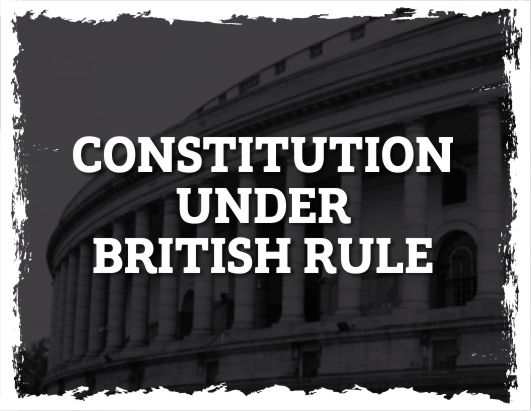 Constitution under British Rule. Constitutional Development of India is a point by point examination of how the Constitution of India has advanced from the 1773 to the 1853. India previously came into contact with the west in the mid eighteenth century when it was visited by the British East India Company. During the nineteenth century, it fell under British colonial rule. The colonial administration in Company Rule was administered by a Governor General until 1857 when the first movement for the independence was started.

The course of Centralization in India was started through the Regulating Act of 1773.

In the Constitutional history of India, this Act got numerous huge changes.

It brought an end to the monopoly of East India Company, in the sector of trade with India. Trade with India was opened for all Britishers except the Tea Trade.

Constitution is basically a set of rules to run the administration of a nation. In the time when the company was ruling over India, British Parliament made the acts for East India Company so that they could have a frame to make the rules or constituion for Indians. The rules they made, couldn’t satify Indians even a single time because they were imposed by alien rulers.

How to register in ToparIndia